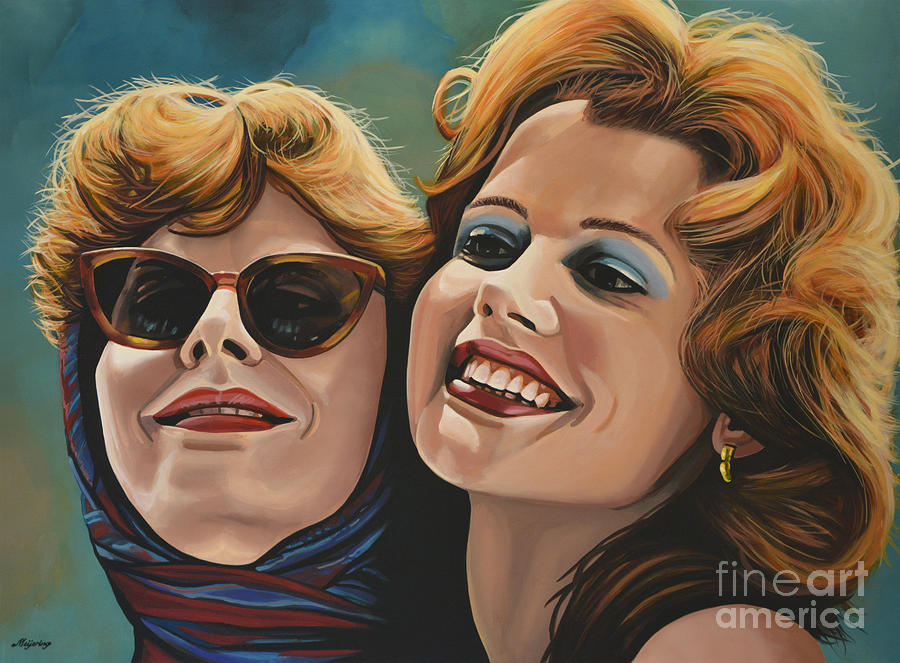 Susan Sarandon and Geena Davies alias Thelma and Louise is a painting by Paul Meijering which was uploaded on November 26th, 2012.

Thelma & Louise is a 1991 American female buddy road film directed by Ridley Scott and written by Callie Khouri. It stars Geena Davis as Thelma and Susan Sarandon as Louise, two friends who embark on a road trip which ends up in unforeseen circumstances. The supporting cast include Harvey Keitel, Michael Madsen, and Brad Pitt in one of his first major film roles.

Despite some controversy at the time of its release, accusing the movie of portraying a negative view of men, the film became a critical and commercial success, receiving six Academy Award nominations and winning for Best Original Screenplay. Scott was nominated for Best Director, and both Sarandon and Davis were nominated for Best Actress. To date, this is the most recent film to have two actors nominated in the same category for either Best Actor or Best Actress. At the intersection of several genres, it is now considered a classic. It influenced other films and artistic works and became a landmark of feminist film. In 2016, the United States Library of Congress selected the film for preservation in the National Film Registry, finding it "culturally, historically, or aesthetically significant".

Congratulations on your feature in My Gallery For All Artists, Paul !! This is such a terrific painting of this memorable pair ~ sharing their supreme joy in just being alive (still) ~ love it :))

nice and congrats for the sale!

Brilliant! Love the expression and personality

Thank you so much, Leonora, for your compliment!!;-))

Am just loving this, Paul, your work is marvelous!!

One of your peers nominated this image in the 1000 views Groups nominated images by your fellow artist in the Special Features #4 promotion discussion. Please visit and pass on the love to another artist. http://fineartamerica.com/groups/1000-views-on-1-image.html?showmessage=true&messageid=3172747

Thank you so much for your support, Christopher!!;-))

What amazing artwork. Nominated for a Special Feature in the 1000 Views On 1 Image group. l/fv

Thank you so much, L Wright, for all your support, and the feature in your vibrant group!!;-))

Thank you so much, David, for all your support, and the feature in your creative group!!;-))

I do enjoy this painting.