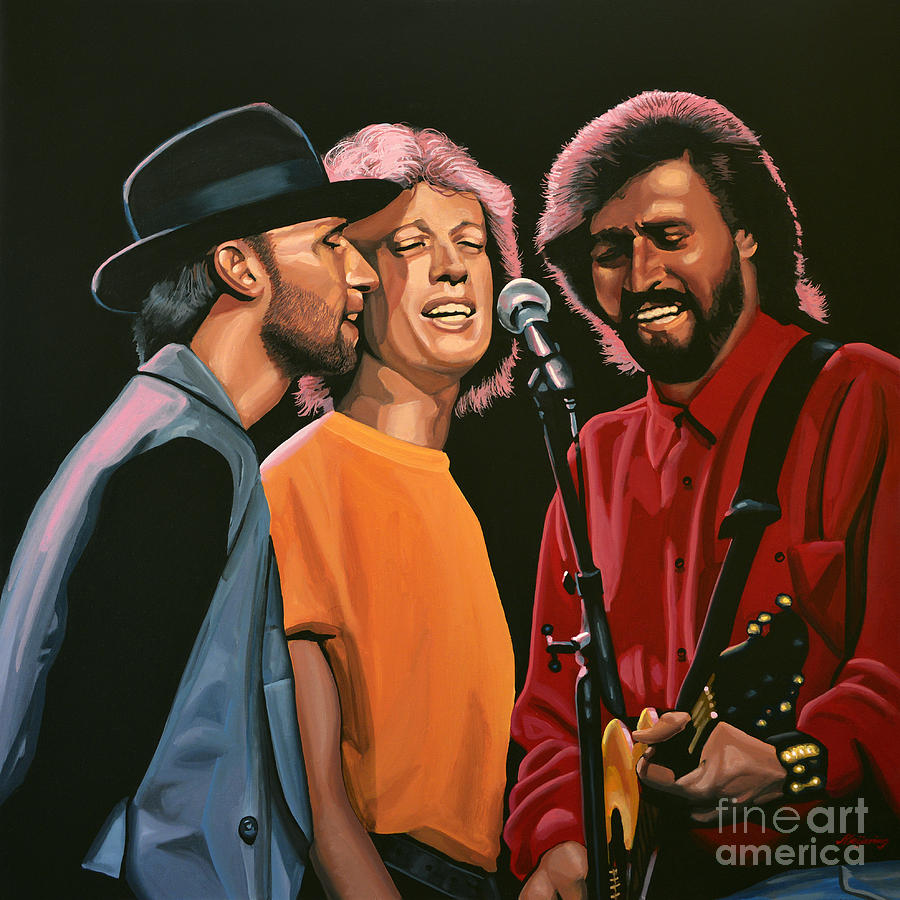 The Bee Gees is a painting by Paul Meijering which was uploaded on August 6th, 2014.

Realistic acrylic painting of the pop music group The Bee Gees, painted by the Dutch fine artist Paul Meijering - the Original painting is 90 x 90 cm and for sale

The Bee Gees were a pop music group formed in 1958. Their line-up consisted of brothers Barry, Robin and Maurice Gibb. The trio were successful for most of their decades of recording music, but they had two distinct periods of exceptional success; as a popular music act in the late 1960s and early 1970s, and as prominent performers of the disco music era in the mid-to-late 1970s. The group sang recognisable three-part tight harmonies; Robin's clear vibrato lead vocals were a hallmark of their earlier hits, while Barry's R&B falsetto became their signature sound during the mid-to-late 1970s and 1980s. The Bee Gees wrote all of their own hits, as well as writing and producing several major hits for other artists.

Born on the Isle of Man to English parents, the Gibb brothers lived in Chorlton, Manchester, England, until the late 1950s where they formed the Rattlesnakes. The family then moved to Redcliffe, in Queensland, Australia, and then to Cribb Island. After achieving their first chart success in Australia as the Bee Gees with "Spicks and Specks" (their 12th single), they returned to the UK in January 1967 where producer Robert Stigwood began promoting them to a worldwide audience.

The Bee Gees have sold more than 220 million records worldwide, making them one of the world's best-selling music artists of all time. They were inducted into the Rock and Roll Hall of Fame in 1997; the presenter of the award to "Britain's first family of harmony" was Brian Wilson, historical leader of the Beach Boys, a "family act" also featuring three harmonising brothers. The Bee Gees' Hall of Fame citation says "Only Elvis Presley, the Beatles, Michael Jackson, Garth Brooks and Paul McCartney have outsold the Bee Gees."

This is incredible! - L/F

Very nice.. I am a huge fan and have done many pieces of them myself.

Thank you so much, Patrice!;-)

Congratulations on your feature in "FAA Musician Portraits

Thank you veru much, Scott, for the feature!!;-)