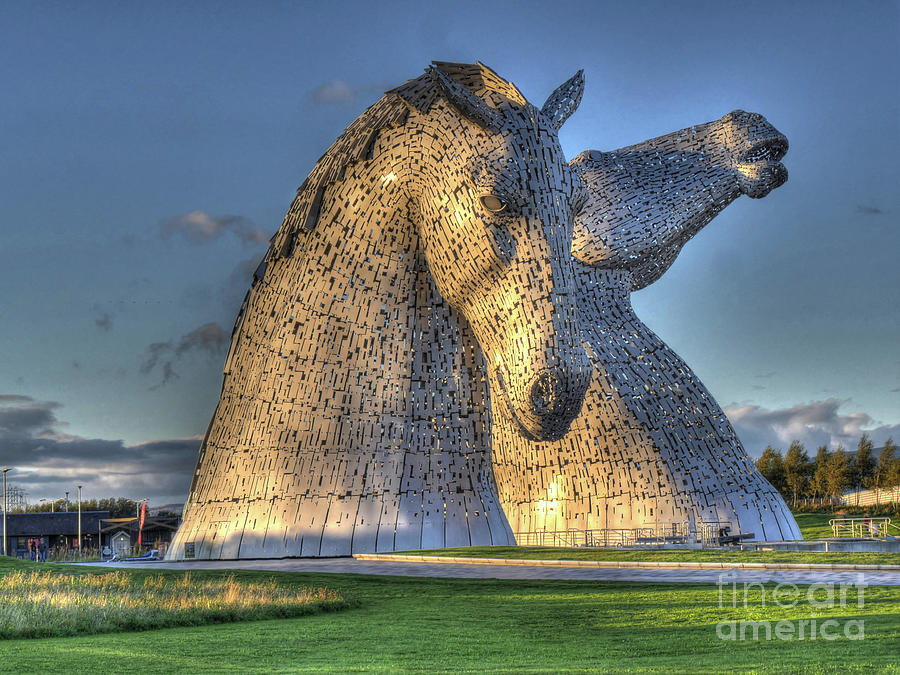 the Kelpies, Helix park, Falkirk 3844 HDR is a photograph by David Rankin which was uploaded on April 8th, 2020.

the Kelpies, Helix park, Falkirk , The Kelpies sculptures are the largest works of art in Scotland, and the largest equine sculptures in the world.
Sculptor Andy Scott was on hand for the opening, along with Duke, a Clydesdale horse which was one of the models for the 30m (100ft) works.
More than 1m people have visited the Kelpies since they were completed in April 2014.
The Kelpies, the centrepiece of the 350-hectare, £43m Helix parkland project, have boosted the local economy by £1.5m per year.
They have won a number of design awards, and were named "Scotland's national treasure" by the National Lottery.
A £1.8m visitor centre has opened at the attraction .
The pair of sculptures are made from 600 tonnes of steel and more than 10,000 special fixings, and tower over the nearby M9 motorway.
The Kelpies sculptures in Falkirk were open to the public in April last year. An exhibition of local schools kids artwork celebrating The Kelpies and The John Muir Way will also be unveiled by Kelpie artist Andy Scott. The artwork will be on display inside The Kelpies for three weeks afterwards for tour guests to admire.

The completion of the £5 million venture marked a significant stage in the £43 million Helix project, which has transformed 865 acres of land between Falkirk and Grangemouth.