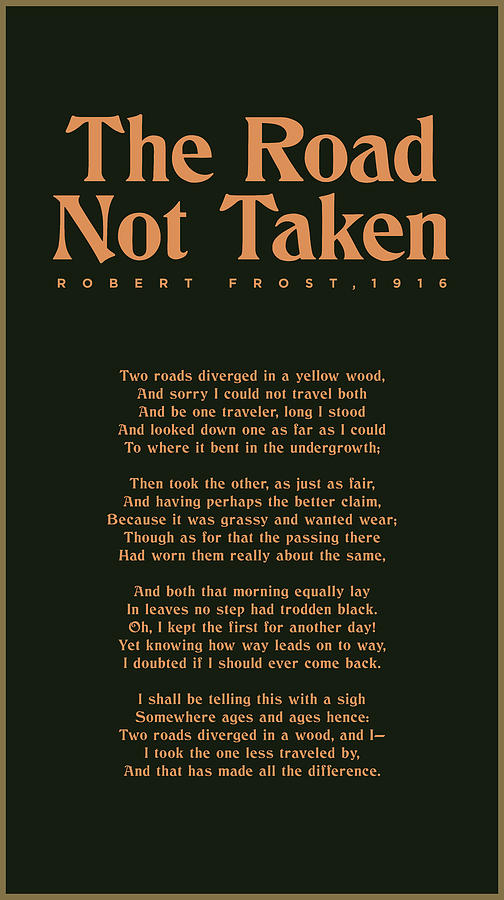 The Road Not Taken - Robert Frost - Typographic Print 02 - Literature is a mixed media by Studio Grafiikka which was uploaded on April 22nd, 2020.

The Road not Taken is a poem by Robert Frost, published in the year 1916. It is one of the most well-known poems in English literature and deals with the themes of choice, divergence of paths and retrospection. It is arguably the most popular work by Robert Frost and is widely considered to champion the idea of "following one's heart" or "following your passion". It is also opined that this could very well be a misinterpretation and what the poet expressed could be as much an expression of regret, as it is of satisfaction. As such, the ambiguity could make this one of the most misunderstood poems of all time.
.......
This is an art print from Studio Grafiikka’s collection of literary posters. Designed in a minimal style, the posters in this series feature quotes from classic literature, famous poems or the musings of some of the most admired literary figures in history. There are quotes on love, life, nature, beauty and some very motivational words of wisdom as well. These quote prints could be ideal gifts for book lovers and poetry lovers and a beautiful wall decor element in your living room, library, office or study room.
They go well in modern, urban interiors as much as they do with traditional, cottage chic or bohemian styled interior spaces.

“Painting is poetry that is seen rather than felt, and poetry is painting that is felt rather than seen.” ... Congratulations on your recent sale of a wonderful work!