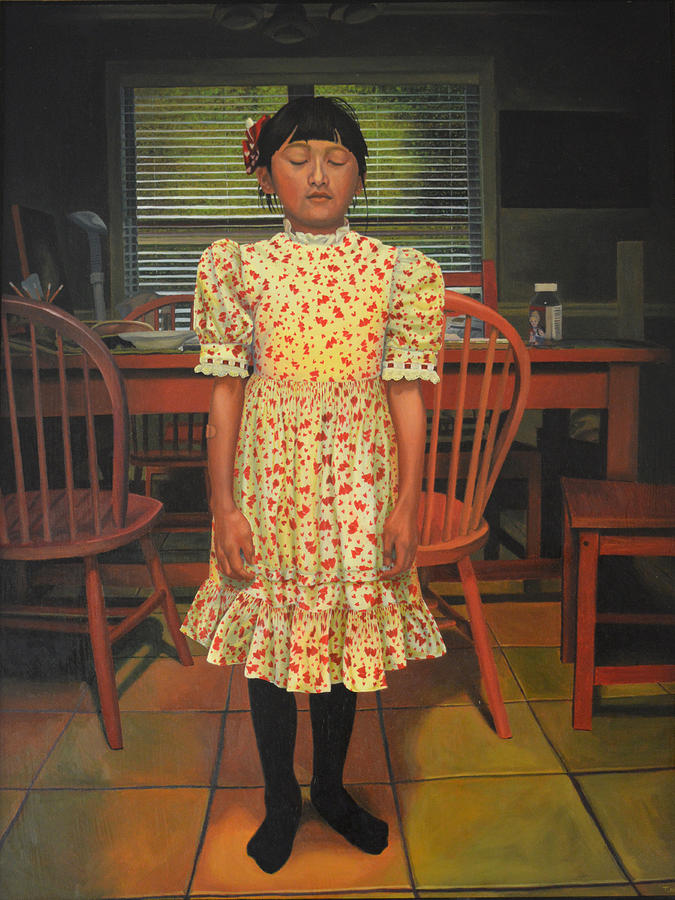 The Valentine Dress is a painting by Thu Nguyen which was uploaded on February 15th, 2010.

This painting is on exhibit at the Outwin Boochever Portrait Competition 2016 at the National Portrait Gallery in Washington, D.C.

This painting portrays the contrast between the stereotype of a carefree sweet childhood with the reality of a life often filled with anxiety, confusion and loneliness. While the girl is wearing a cute sentimental valentines dress, her entire posture is self contained and rigid. She is standing in a typical kitchen but seems physically and emotionally detached from her environment.

Congratulations on your work having been shown at the Smithsonian’s National Portrait Gallery . There is so much love that went into creating this little girl's painting. Simply stunning, Thu. I suspect that this will win this competition as well. Beautiful. F/L/V

Absolutely love this. Your color sense is amazing.

Something so universally wonderful here that I can't quite put it into words ... I just know I enjoy looking at this painting!

What a great composition. I am drawn to her experession on her face and I want to know more. The dress is very impressive too.

This is truly a beautiful piece. Congratulations on your sale.

Congratulations on your sale! Wonderfully captured the expression!

A stunning painting. You have a true gift.

Extraordinary and beautiful. I love this painting.

Doug is right Thu, this really catches ones eye. Your work is exquisite! So blessed to have discoverd you and your work. What an inspiration. My best, Chris

your art is so amazing,Thu! Congratulations on this most wonderful painting! Looks like a photograph.I remember a favorite red and white dress I had as a child...this brings back that memory-thank you! marlene

This is a real attention-grabber.

This is a real attention-grabber.

You caught the perfect moment of pride and modesty. It is simple and beautiful. ... we all want to sell, but your price is too low for a piece like this.

A novel could be written on this image. Thu, I'm so glad that this is your first passion.