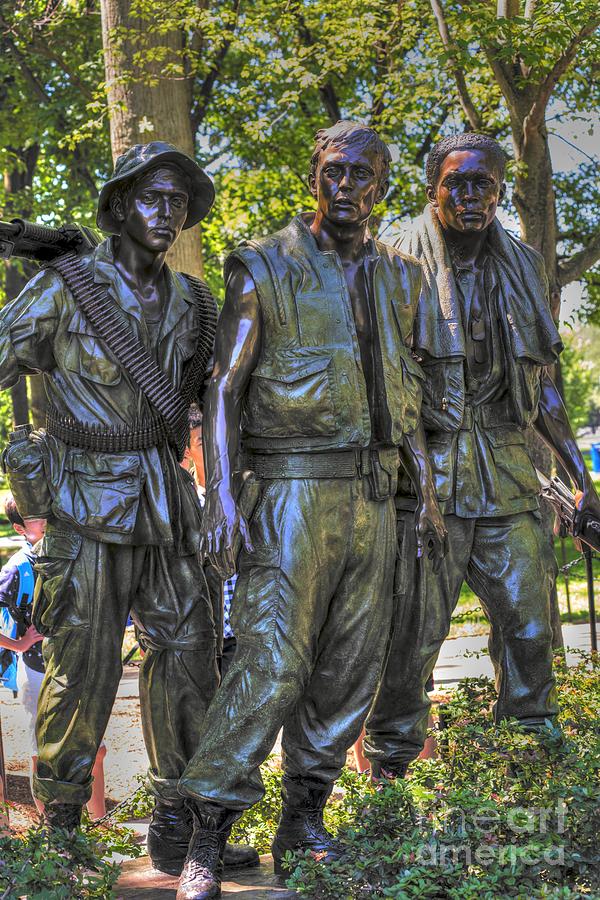 Three Soldiers is a photograph by David Bearden which was uploaded on August 2nd, 2015.

This well-known sculpture by Frederick Hart portrays three young uniformed American soldiers. While the military attire is meant to be symbolic and... more

This well-known sculpture by Frederick Hart portrays three young uniformed American soldiers. While the military attire is meant to be symbolic and general in nature, the combat equipment displayed represents the figures as serving in either the U.S. Army, or U.S. Marine Corps during the Vietnam War.

Of the three men, the lead figure (in the middle) represents a Marine, as he wears a Type M-1955 body armor vest, which was worn exclusively by Marines in Vietnam. He is armed only with a Colt M1911A1 .45 caliber automatic pistol, which is carried in a Government Issue (GI) M-1916 leather pistol holster, positioned on the right hip. The M-1916 holster is attached to an M-1956 GI pistol belt, and a small GI .45 pistol magazine pouch is carried on the belt's left front. The Marine wears a body-armor vest (but no shirt), along with Tropical Combat trousers and boots; he wears no headgear. Like his comrades, he carries a pair of plastic GI 1-quart canteens, carried in two M-1956 canteen covers that are attached to his pistol belt, and situated at the rear center hip.

The man on the right wears combat equipment consistent with a U.S. Army Soldier, and specifically, a Type M69 body armor vest, which was the primary armor vest used mainly by U.S. Army personnel in Vietnam, from about 1967 on. His M69 armor vest is unsecured, and worn fully open at the front, which was a typical fashion of troops in Vietnam, as a measure in which to promote ventilation (in spite of reducing the vest's overall protective levels). Draped around the collar of his M69 vest and hanging on his chest front, this Soldier carries a GI towel, which served to absorb sweat and cushioned heavy loads, and was a common practice of many Soldiers in Vietnam. In his left hand he carries an M16A1 rifle, the main battle rifle for both Soldiers and Marines from about 1967 on. His uniform consists of the Tropical Combat Uniform (jacket and trousers) and "jungle" boots. As was typically done by U.S. combat personnel fighting in the oppressive tropical environment of Vietnam, the uniform jacket's sleeves are rolled up. In his right hand, this Soldier holds an M1 steel helmet covered with a camouflage cover, that is secured over the helmet with an elastic headband (which itself retains a small bottle of GI insect repellent on the right side). He also wears an M-1956 GI pistol belt over the waist of his uniform jacket, and it retains a GI 1-quart canteen and M-1956 canteen cover, situated at the left rear hip. Lastly, on a GI neck chain set, he wears a pair of GI Identification Tags (i.e. "Dog Tags"), which are visible on his bare chest, seen through the open front of his uniform jacket and armor vest.

The man on the left is slightly less specific in the service representation of his gear and uniform, but he appears to be a U.S. Army Soldier, as he wears a Tropical ("Boonie") Hat, which was widely worn by Army combat personnel in Vietnam (particularly towards the latter part of the war), and to a much lesser extent by Marines. His uniform consists of the Tropical Combat Jacket and Trousers, and "jungle" boots. Like his comrade on his far right, his uniform jacket's sleeves are rolled up. This man wears no body armor, and is armed only with an M60 machine gun, and he carries two separate belts of 7.62mm machine gun ammunition draped and criss-crossed over his torso. He is also wearing an M17 Protective (Gas) Mask carrier on his left thigh, although U.S. troops infrequently wore or used gas masks in Vietnam. (They were used primarily when tear gas (CS gas) was employed in combat, such as by tunnel rats, and by troops engaged in urban/city combat, such as the Marines in Hue City in January and February, 1968). Under his uniform jacket, he also wears a GI M-1956 pistol belt, with two M-1956 canteen covers that are attached, each carrying a GI 1-quart canteens, and situated at the right rear hip. In order to portray the major ethnic groups that were represented in the ranks of U.S. combat personnel that served in Vietnam, the statue's three men are purposely identifiable as Caucasian (the lead man), African American (man on right), and Hispanic (man on left). These three figures were based on six actual young men models, of which two (the Caucasian, and the African-American) were active-duty Marines at the time that the sculpture was commissioned. The Caucasian figure was modeled after James E. Connell, III, then a Corporal in the Marines; the African-American figure was modeled after three men, Marine Corporal Terrance Green, Rodney Sherrill and Scotty Dillingham; the Hispanic figure was modeled after Guillermo Smith De Perez DeLeon


I see the wall as a kind of ocean, a sea of sacrifice that is overwhelming and nearly incomprehensible in its sweep of names. I place these figures upon the shore of that sea, gazing upon it, standing vigil before it, reflecting the human face of it, the human heart.

You've got the shot at a nice time of year. Lovely colours on the statues. Got a similar shot but drab - on a dismal day.

Andrew, thanks very much...