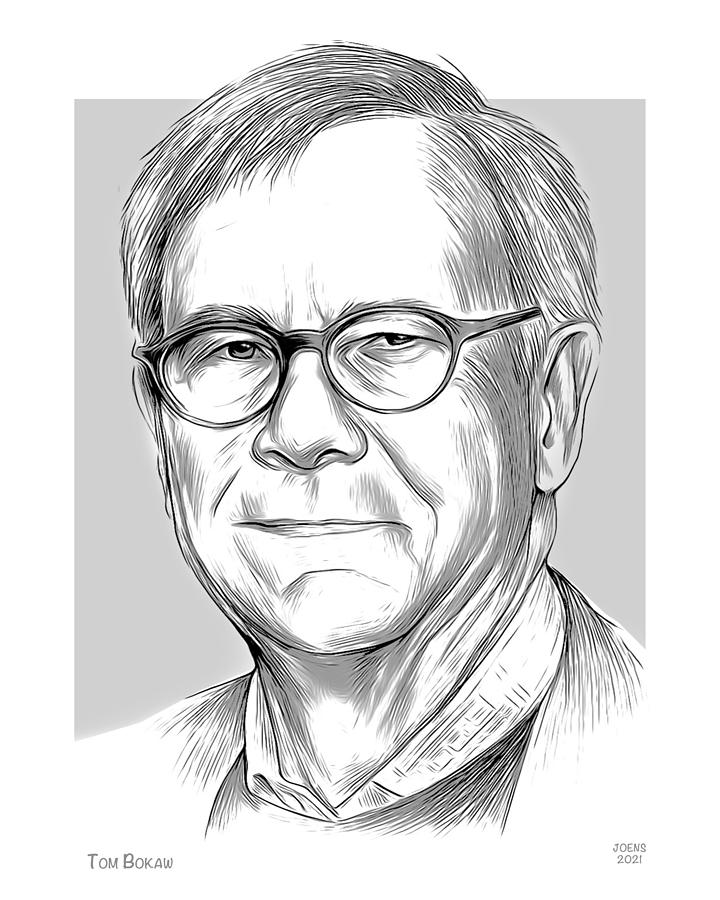 Tom Brokaw - line art is a mixed media by Greg Joens which was uploaded on October 25th, 2021.

Thomas John Brokaw (/ˈbroʊkɔː/; born February 6, 1940) is an American retired network television journalist and author. He first served as the co-anchor of The Today Show from 1976 to 1981 with Jane Pauley, then as the anchor and managing editor of NBC Nightly News for 22 years (1982–2004). At this position he was one of the "Big Three anchors" along with Dan Rather and Peter Jennings.[3] In the previous decade he served as a weekend anchor for the program from 1973 to 1976. He is the only person to have hosted all three major NBC News programs: The Today Show, NBC Nightly News, and, briefly, Meet the Press. He formerly held a special correspondent post for NBC News. He occasionally writes and narrates documentaries for other outlets.

Along with his competitors Peter Jennings at ABC News and Dan Rather at CBS News, Brokaw was one of the "Big Three" U.S. news anchors during the 1980s, 1990s and early 2000s. All three hosted their networks' flagship nightly news programs for more than 20 years. They began and retired from their anchor chairs (or died, in Jennings' case) with Dan Rather notably being replaced by CBS due to false reports broadcast on 60 Minutes II within a year of each other.

Brokaw has also written several books on American history and society in the 20th century. He is the author of The Greatest Generation (1998) and other books and the recipient of numerous awards and honors including the Presidential Medal of Freedom, which was awarded to him by President Barack Obama in 2014.
On January 22, 2021, NBC announced that Brokaw would retire after 55 years at the network, one of the longest standing anchors in the world at the same news network, along with Ecuadorian news anchor Alfonso Espinosa de los Monteros who has been in Ecuavisa since 1967. Source: Wikipedia