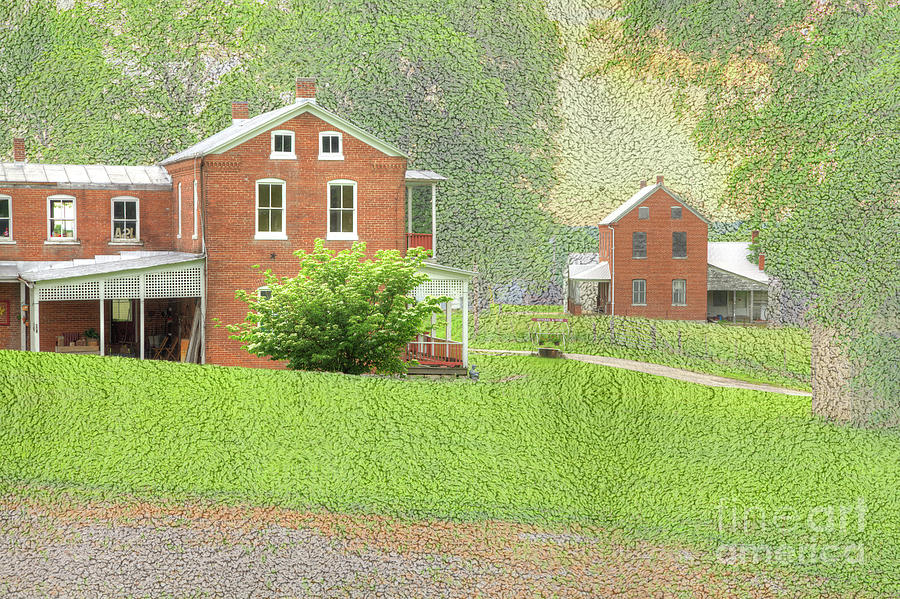 Uniontown Missouri is a piece of digital artwork by Larry Braun which was uploaded on June 1st, 2018.

A small village in the south-central part of Union Township, on the site of the old Indian settlement known as "Le Grand Village Sauvage" by the French. The Shawnees were removed from the county shortly after the defeat and death of their chieftain Tecumseh in 1813.

The first white settlement here was made in 1839 by a group of German Lutherans who were a part of the "Saxon Migration,". This group, the last to arrive of the Saxons in Perry County, were led by Pastor Theodor Carl Friedrich Grueber, from the parish of Paitzdorf in Saxe-Altenburg; and they named their new settlement Paitzdorf after their German home.

The original name Paitzdorf was retained at least till 1866. Being so distant from the other Saxon settlements, however, it was exposed to early amalgamation with the native Americans; and this gradual process of fusion was doubtless symbolized by the change to the name of Uniontown, which probably took place at about the same time as the formation of the new Union Township after 1870.

I walked the entire length of Uniontown, looking for something of interest. I talked to a gentlemen working on an old truck. Back then the engine did not fill the space under the hood like they do now, and I was thinking that he still had to install more parts to get it going, but he assured me that this truck had been running for several years.

I walked down a little further and met a man coming out of an antique store caring some chairs. He said he was taking them to his store in Ste Genevieve. I know where is store is, and had just been up to Ste Genevieve a few hours earlier taking photos of the Garden Walk.

My favorite scene of Union Town was these two houses on opposite sides of the road. These building are testaments of a time gone by. Photographers often talk about how a scene talks to them. This one is shouting at me. I hope you can hear it as well.