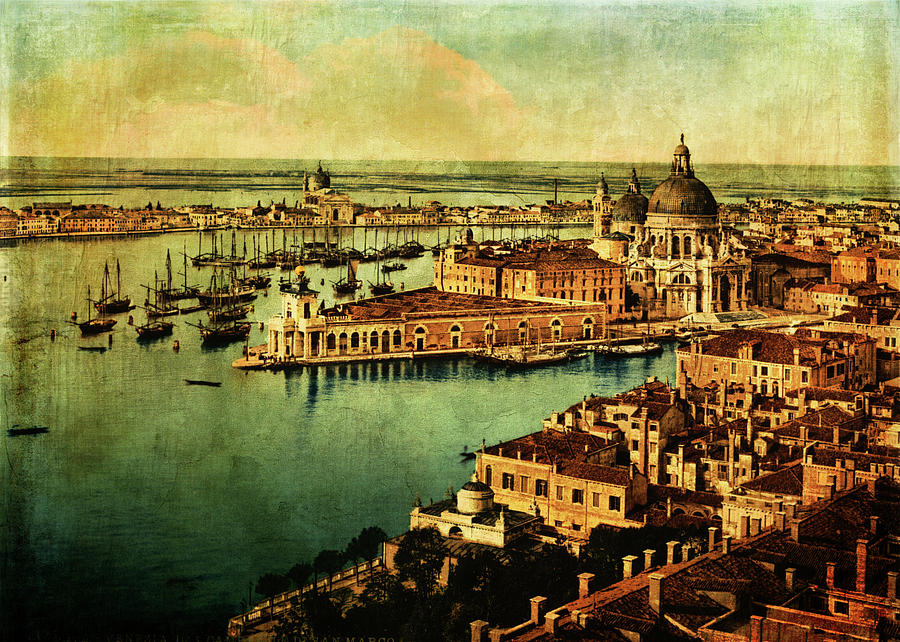 Venice Observed is a piece of digital artwork by Sarah Vernon which was uploaded on September 26th, 2016.

The original vintage photograph is a view from campanile San Marco, Venice, Italy ca. 1895, and it is divine, I confess. But how could someone like... more

The original vintage photograph is a view from campanile San Marco, Venice, Italy ca. 1895, and it is divine, I confess. But how could someone like me resist ageing it further?

The title I have chosen is a play on the name of a verse piece by Christopher Fry, Venus Observed, which premiered in 1950 at the St James’ Theatre in London and was directed by Laurence Olivier, who also starred. The cast included such names as Rachel Kempson (mother of Vanessa Redgrave and her late siblings), the irreplaceable Denholm Elliott, and Brenda de Banzie whom film buffs will remember from Hobson’s Choice.
Of course, it might have been a nod to Mary McCarthy’s 1963 book about the sinking city, Venice Observed, but it isn’t. Naturally it’s not — I’m an actress, dah-lings!

This is so very beautiful and wonderful, Sarah!!!! :)))vf

Thank you so much, Laurie!

Absolutely glorious work of art, Sarah!!!! Your magic touch is always a plus!!!! l/f

Thank you so much!

Excellent work Sarah ! Adding this to my favourite collection.

This is absolutely magnificent...literally made me gasp! 😀Beth

How lovely to hear that - thank you!

This is very gorgeous work, Sarah!

Thank you very much, Spokenin!

beyond breathtaking, I love the textures/layers ♥ F/L

Hi Sarah. Divine it is! Love the vintage effects as much as you! FAV!

Aw! Thank you so much, Reynold.

What a beautiful scene! Gorgeous!

How did I miss your comment? Thanks so much, Bunny!

I love this Sarah, perfect processing with such rich earthy textures!! LF

Lovely treatment Sarah, and a great view of my favourite city! l/f

I love the title and it's various nods! (How amazing it would have been to see that show!) This is beautiful Sarah! I love the textures and rich warm tones! l/f!

Yes, it would! I'm thrilled you like my treatment. Thanks so much.

Sarah, that is such a wonderful view!! LF