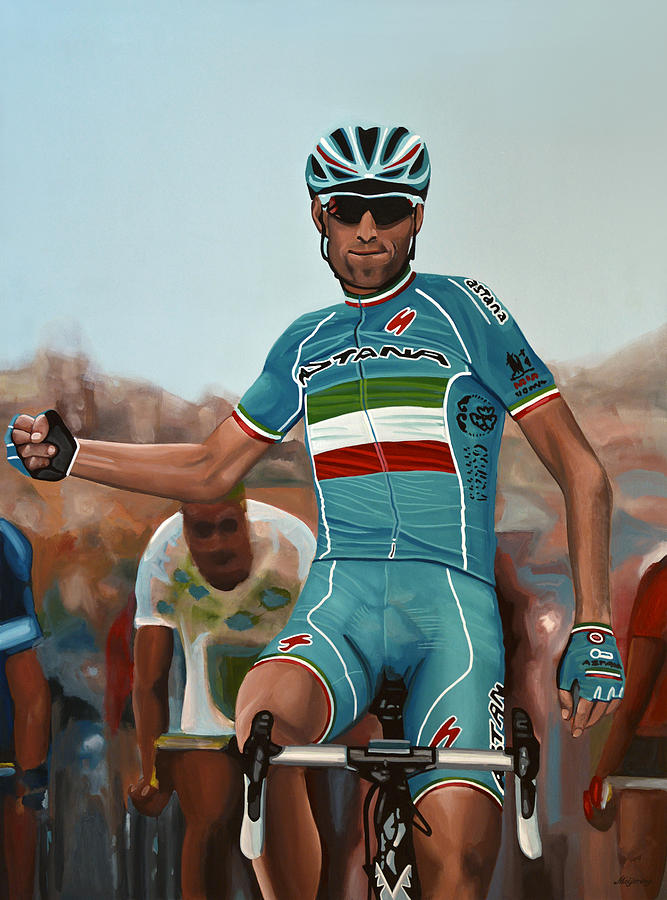 Vincenzo Nibali Painting is a painting by Paul Meijering which was uploaded on December 23rd, 2014.

Vincenzo Nibali (born 14 November 1984) is an Italian professional road bicycle racer, considered one of the strongest stage race riders in the world today. He rides for the Kazakh UCI ProTeam Astana.

Born near the Strait of Messina, his nickname is the "Shark of the Strait", "the Shark of Messina" or simply "The Shark". His first major win came at the 2006 GP Ouest-France, a World class race. However, experts such as Michele Bartoli have said Nibali is most suited to competing in multi-stage races. He is a highly capable descender and bike handler, very good climber and good time trialist. Nibali is an all-rounder. His biggest wins are the 2010 Vuelta a Espa�a, the 2013 Giro d'Italia, and the 2014 Tour de France, making him one of six cyclists who have won the three Grand Tours in their career. He has also won the 2012 and 2013 editions of the Tirreno�Adriatico stage race. The Italian cyclist is mostly a stage racer, but he's a good performer in classic cycle races as well, having won the 2014 and 2015 editions of the Italian National Road Race Championships, the GP Ouest-France in 2006 and above all a "Monument" of road bicycle racing: the Giro di Lombardia in 2015. He achieved podiums in Liege�Bastogne-Liege and Milan-San Remo.

Thank you so much, Dan, for the feature in your awesome group!!;-))

Congratulations on being featured in the Fine Art America Group "Blue Painters Group!"

Thank you so very much, Mario, for your support and the feature in your blue group!!;-))

Fantastic painting! First sight I thought it is a photograph! :-)

Your work is so life like, i almost deleted it cause it looked like a photograph. Excellent work again

Thank you so very much, Julie, for your most lovely compliment!!;-)