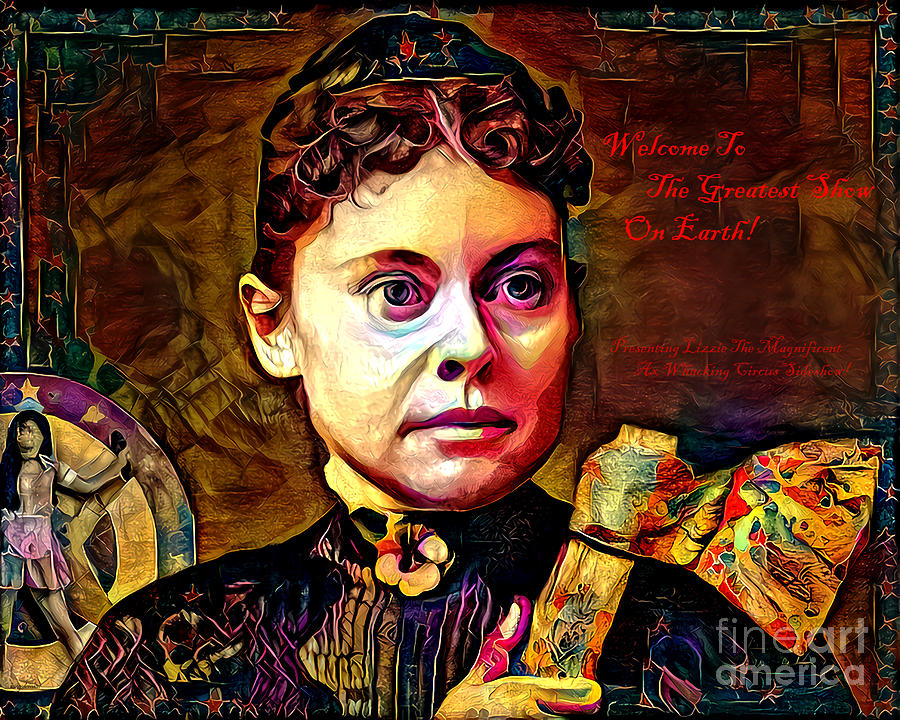 Welcome To The Greatest Show On Earth Lizzie The Magnificent Ax Whacking Circus Sideshow 20210916TX is a photograph by Wingsdomain Art and Photography which was uploaded on September 16th, 2021.

by Wingsdomain Art and Photography

Lizzie Borden took an axe. And gave her mother forty whacks. When she saw what she had done. She gave her father forty-one.

Lizzie Andrew Borden (July 19, 1860 - June 1, 1927) was an American woman tried and acquitted of the August 4, 1892 axe murders of her father and stepmother in Fall River, Massachusetts. No one else was charged in the murders, and despite ostracism from other residents Borden spent the remainder of her life in Fall River. She died of pneumonia at age 66, just days before the death of her sister, Emma. The murders and trial received widespread publicity throughout the United States and, along with Borden herself, they remain a topic in American popular culture to the present day. They have been depicted in numerous films, theatrical productions, literary works, and folk rhymes, and are still very well known in the Fall River area. John Morse arrived in the evening of August 3 and slept in the guest room that night. After breakfast the next morning, at which Andrew, Abby, Lizzie, Morse and the Bordens' maid Bridget "Maggie" Sullivan were present, Andrew and Morse went to the sitting room, where they chatted for nearly an hour. Morse left around 8:48 am to buy a pair of oxen and visit his niece in Fall River, planning to return to the Borden home for lunch at noon. Andrew left for his morning walk sometime after 9 am. Although the cleaning of the guest room was one of Lizzie's and Emma's regular chores, Abby went upstairs some time between 9:00 am and 10:30 am to make the bed. According to the forensic investigation, Abby was facing her killer at the time of the attack. She was first struck on the side of the head with a hatchet which cut her just above the ear, causing her to turn and fall face down on the floor, creating contusions on her nose and forehead. Her killer then struck her multiple times, delivering 17 more direct hits to the back of her head, killing her. When Andrew returned at around 10:30 am, his key failed to open the door, so he knocked for attention. Sullivan went to unlock the door; finding it jammed, she uttered an expletive. She would later testify that she heard Lizzie laughing immediately after this; she did not see Lizzie, but stated that the laughter was coming from the top of the stairs. This was considered significant as Abby was already dead by this time, and her body would have been visible to anyone on the home's second floor. Lizzie later denied being upstairs and testified that her father had asked her where Abby was, and she had replied that a messenger had delivered Abby a summons to visit a sick friend. Lizzie stated that she had then removed Andrew's boots and helped him into his slippers before he lay down on the sofa for a nap (an anomaly contradicted by the crime scene photos, which show Andrew wearing boots). She then informed Sullivan of a department store sale and permitted her to go, but Sullivan felt unwell and went to take a nap in her bedroom instead. Sullivan testified that she was in her third-floor room, resting from cleaning windows, when just before 11:10 am she heard Lizzie call from downstairs, "Maggie, come quick! Father's dead. Somebody came in and killed him." Andrew was slumped on a couch in the downstairs sitting room, struck 10 or 11 times with a hatchet-like weapon. One of his eyeballs had been split cleanly in two, suggesting that he had been asleep when attacked. His still-bleeding wounds suggested a very recent attack. Dr. Bowen, the family's physician, arrived from his home across the street to determine that both victims had died. Detectives estimated his death had occurred at approximately 11:00 am. -wikipedia

In the mid-16th century, freak shows became popular pastimes in England. Deformities began to be treated as objects of interest and entertainment, and the crowds flocked to see them exhibited. A famous early modern example was the exhibition at the court of Charles I of Lazarus and Joannes Baptista Colloredo, two conjoined brothers born in Genoa, Italy. While Lazarus appeared to be otherwise ordinary, the underdeveloped body of his brother dangled from his chest. When Lazarus was not exhibiting himself, he covered his brother with his cloak to avoid unnecessary attention. As well as exhibitions, freak shows were popular in the taverns and fairgrounds where the freaks were often combined with talent displays. For example, in the 18th century, Matthias Buchinger, born without arms or lower legs, entertained crowds with astonishing displays of magic and musical ability, both in England and later, Ireland.I t was in the 19th century, both in England and the United States, where freak shows finally reached maturity as successful commercially run enterprises. During the late 19th century and the early 20th century freak shows were at their height of popularity; the period 1840s through to the 1940s saw the organized for-profit exhibition of people with physical, mental or behavioral rarities. Although not all abnormalities were real, some being alleged, the exploitation for profit was seen as an accepted part of American culture. The attractiveness of freak shows led to the spread of the shows that were commonly seen at amusement parks, circuses, dime museums and vaudeville. The amusement park industry flourished in the United States by the expanding middle class who benefited from short work weeks and a larger income. There was also a shift in American culture which influenced people to see leisure activities as a necessary and beneficial equivalent to working, thus leading to the popularity of the freak show. The showmen and promoters exhibited all types of freaks. People who appeared non-white or who had a disability were often exhibited as unknown races and cultures. These “unknown” races and disabled whites were advertised as being undiscovered humans to attract viewers. For example, those with microcephaly, a condition linked to intellectual disabilities and characterized by a very small, pointed head and small overall structure, were considered or characterized as “missing links” or as atavistic specimens of an extinct race. Hypopituitary dwarfs who tend to be well proportioned were advertised as lofty. Achondroplastic dwarfs, whose head and limbs tend to be out of proportion to their trunks, were characterized as exotic mode. Those who were armless, legless, or limbless were also characterized in the exotic mode as animal-people, such as “The Snake-Man”, and “The Seal man”. There were four ways freak shows were produced and marketed. The first was the oral spiel or lecture. This featured a showman or professor who managed the presentation of the people or “freaks”. The second was a printed advertisement usually using long pamphlets and broadside or newspaper advertisement of the freak show. The third step included costuming, choreography, performance, and space used to display the show, designed to emphasize the things that were considered abnormal about each performer. The final stage was a collectable drawing or photograph that portrayed the group of freaks on stage for viewers to take home. The collectable printed souvenirs were accompanied by recordings of the showmen's pitch, the lecturer's yarn, and the professor's exaggerated accounts of what was witnessed at the show. Exhibits were authenticated by doctors who used medical terms that many could not comprehend but which added an air of authenticity to the proceedings. Freak show culture normalized a specific way of thinking about gender, race, sexual aberrance, ethnicity, and disability. Scholars believe that freak shows contributed significantly to the way American culture views nonconforming bodies. Freak shows were a space for the general public to scrutinize bodies different from their own, from dark-skinned people, to victims of war and diseases, to ambiguously sexed bodies. People felt that paying to view these “freaks” gave them permission to compare themselves favorably to the freaks. During the first decade of the twentieth century the popularity of the freak show was starting to dwindle. In their prime, freak shows had been the main attraction of the midway, but by 1940 they were starting to lose their audience, with credible people turning their backs on the show. In the nineteenth century, science supported and legitimized the growth of freak shows, but by the twentieth century, the medicalization of human abnormalities contributed to the end of the exhibits' mystery and appeal. -wikipedia

More from Wingsdomain Art and Photography

There are no comments for Welcome To The Greatest Show On Earth Lizzie The Magnificent Ax Whacking Circus Sideshow 20210916TX.   Click here to post the first comment.