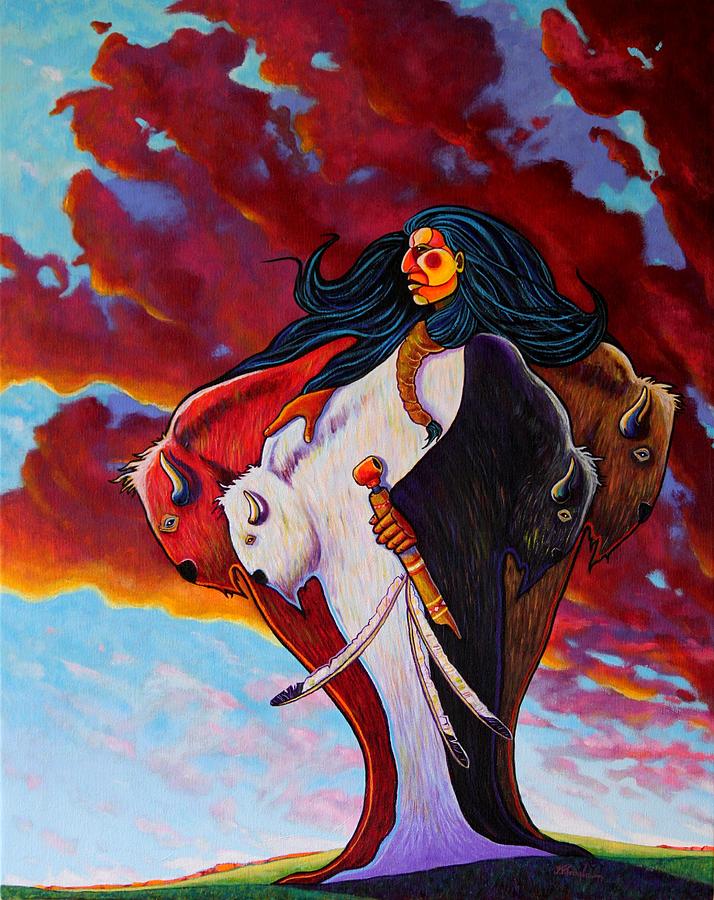 When The White Buffalo Woman First Appeared is a painting by Joe Triano which was uploaded on October 26th, 2013.

The Sioux are a warrior tribe, and one of their proverbs says, Woman shall not walk before man. Yet White Buffalo Woman is the dominant figure of... more

The Sioux are a warrior tribe, and one of their proverbs says, " Woman shall not walk before man. " Yet White Buffalo Woman is the dominant figure of their most important legend. This holy woman brought the sacred buffalo calf pipe to the Sioux. There could be no Indians without it. Before she came, people didn't know how to live. They know nothing. The Buffalo Woman put her sacred mind into their minds. At the ritual of the sun dance one woman, usually a mature and universally respected member of the tribe, is given the honor of representing Buffalo Woman.
Though she first appeared to the Sioux in human form, White Buffalo Woman was also a buffalo - the Indians brother, who gave it's flesh so that the people might live. Albino buffalo were sacred to all Plains tribes; a white buffalo hide was a sacred talisman, a possession beyond price.
White Buffalo Woman, was WAKAN. She wore her blue-black hair loose except for a strand at the left side, which was tired up with buffalo fur. Her eyes shone dark and sparkling, with great power in them. She had two round Red dots of face paint on her cheeks.She also brought forward the sacred pipe, she told them that the smoke rising from the bowl was Tunkashila's breath, the living breath of the Grandfather Mystery. White Buffalo Woman showed them how to pray and sing the pipe filling song and how to lift the pipe up to the sky, towards Grandfather, and down toward Grandmother Earth, to Unci, and the four directions of the universe. Thank you,....Joe

Thanks again Michael, all the best my friend!

Michael, coming from you I surly am blessed. Thank you brother, all the best! ....Joe

Hello Stephanie! Thank you my friend for this feature in your Group - all the best to you! .......Joe

Congrats on your work and sale Joe!

Hello Stanley and thank you for this feature in your Group - all the best my friend! ...Joe

Wendy,..I very much appreciate your thoughts and comments - the pleasure was all mine. All the best to you! .........Joe

Congratulations on your top placement win in the "YOUR Best Spiritual Work that tells a Story" contest hosted by FAA's Esoteric and METAPHYSICAL Spiritual group. Thank you for participating and creating amazing artwork that promotes peace.

Thank you kindly for this feature in your Group John - Images That Excite You, all the best to you my friend! ........Joe

I know all about White Buffalo Woman. Thank you for painting her, she is so important to the Dakota. Great job Joe!

My dear friend Kaytee, I'm so glad that my painting moves you. All the very best to you always! .......Joe

Thank you Shadowlea Is,..excellent comment my friend - all the best to you! ........Joe

Hello Lee and thank you for your thoughts and comments, much appreciated my friend - all the best to you! .......Joe

I love this style of painting. Great job.