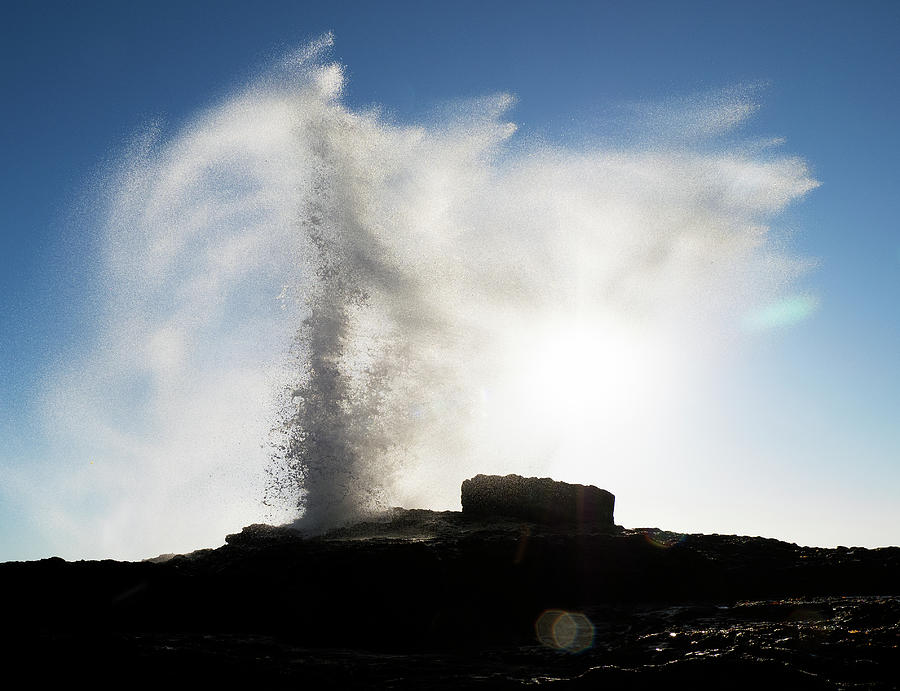 White Point Erupts is a photograph by Joe Schofield which was uploaded on August 30th, 2021.

An explosion of surf impersonates a geyser on the rocky outcropping at White Point. Located along the Southern California coastal area of San Pedro,... more

An explosion of surf impersonates a geyser on the rocky outcropping at White Point. Located along the Southern California coastal area of San Pedro, the history of White Point sort of goes as follows:

There are three versions of how White Point got its name:

Second, the cliffs are pretty pale, and from the sea they looked white to sailors aboard ships.

Third, the name honors State Senator Stephen White, (1853-1901, who fought to get the deep water harbor in San Pedro.

Who knows the truth? Here's what we do know:

The entire area was once part of the Rancho Los Palos Verdes, owned by the Sepulvedas. Basically, it was a cattle ranch.
But everyone--the Native Americans, the Spanish, the Sepulvedas, and local farmers and fishermen, knew the entire coast, including White Point, as a great place to dive for abalone.

By 1895, a dozen Japanese fishermen had established a home base for their abalone harvesting and canning business at White Point. They harvested abalone all the way north to Santa Cruz and out to Catalina island, but their processing plant (actually, a shed) was at White Point, on what is today the White Point Nature Preserve. The men rented it and their homes from Rámon Sepulveda, son of the original Rancho owner. Some sites and books refer to him as Roman Sepulveda.

Right about the time the abalone business venture petered out--partly due to over-harvesting--a natural sulfur spring was discovered at White Point. Sepulveda collaborated with two of the Japanese entrepreneurs, Tamiji and Tojuro Tagami, and built a two-story hotel and recreation center at White Point, down on the beach.

So about 100 years ago, the hot springs was developed and roads were dug out and graded. Another man, Mitsuo Endo, anchored a fishing barge over the kelp beds offshore. He built a pier and ferried fishermen out to sea on power boats. And Sepulveda put in the fireplaces and benches made of local stone, and had a grove of palm trees planted to border his terrazzo dance floor. Have no doubt; this was a fancy place. By 1925, the Royal Palms complex included a restaurant, bath house, private salt water swimming pools cased in concrete, and an enclosed boating area along with the hotel. The Taguros managed the place, but by law--since they were Asian--they could not become citizens or own land.

Nature interfered with the resort. In 1928, a huge storm damaged the concrete under the swimming pools, and the 1933 Long Beach earthquake shifted the ground and blocked off the hot spring. The resort foundered during the Depression, then closed down in the late 1930s.

In February 1942, just a couple of months after the attack on Pearl Harbor that brought the US into the war, all of the ethnic Japanese who farmed and worked in the area were rounded up and taken to internment camps, losing everything. White Point itself was absorbed into Fort MacArthur and fortified.

Love how you captured this with that brilliant backlighting...like liquid fireworks

Fun shot. I think the name origin is the second one, the look from the sea.

Nice shot - and a fascinating, if sad, description.

What a great moment of capture Joe ! L/F

Beautiful work! Thank you for submitting your artwork to the Southern California Artist Collective Group where the image is now featured on the home page. Feel free to post this in the Featured archive in the group discussion page section L/F

Congratulations your photograph has been featured in the FAA Group ‘The Outdoor Photographer' You are invited to post your featured images in the Group's 'Thanks for the Feature / photo archive.