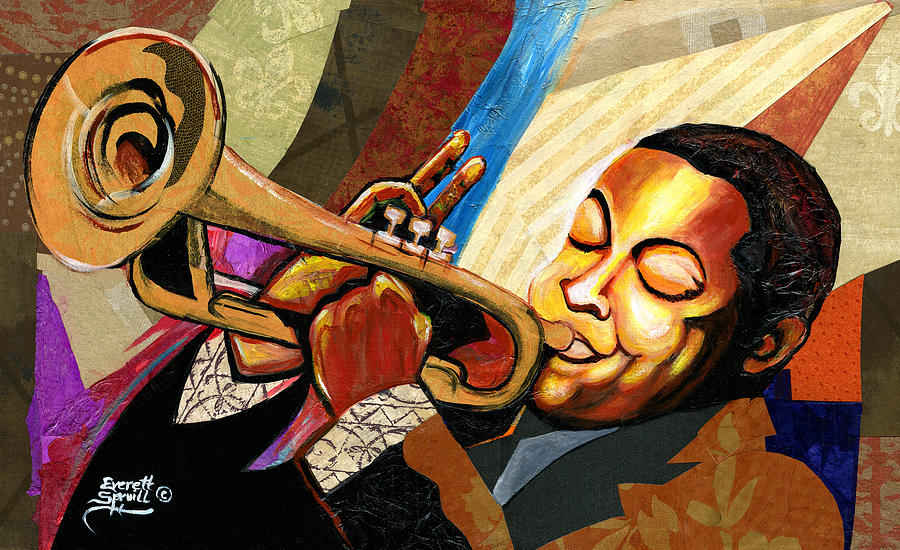 Wynton Marsalis is a painting by Everett Spruill which was uploaded on June 24th, 2015.

22 x 36" mixed media on canvas features an abstract/cubist collage of jazz impresario Wynton Marsalis. Marsalis was born in New Orleans, Louisiana, on October 18, 1961, and grew up in the suburb of Kenner. He is the second of six sons born to Delores Ferdinand and Ellis Marsalis Jr., a pianist and music teacher. He was named for jazz pianist Wynton Kelly. Branford Marsalis is his older brother and Jason Marsalis and Delfeayo Marsalis are younger. All three are jazz musicians. While sitting at a table with trumpeters Al Hirt, Miles Davis, and Clark Terry, his father jokingly suggested that he might as well get Wynton a trumpet, too. Hirt volunteered to give him one, so at the age of six Marsalis received his first trumpet.

Although he owned a trumpet when he was six, he didn't practice much until he was 12. He attended Benjamin Franklin High School and the New Orleans Center for Creative Arts. He studied classical music at school and jazz at home with his father. He played in funk bands and a marching band led by Danny Barker. He performed on trumpet publicly as the only black musician in the New Orleans Civic Orchestra. After winning a music contest at fourteen, he performed a trumpet concerto by Joseph Haydn with the New Orleans Philharmonic. Two years later he performed Brandenburg Concerto No. 2 in F Major by Bach.[5] At seventeen, he was the youngest musician admitted to Tanglewood Music Center.