In The Eye Of The Beholder. 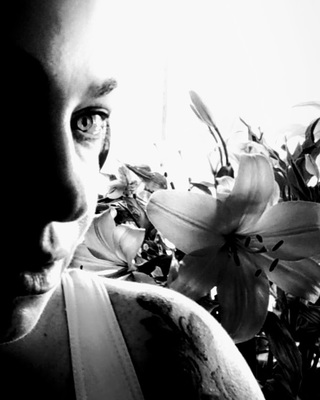 intentional art. Technically a selfie. What is the solution when you have limited models and a million ideas.

I believe some towns (cities) have models that need exposure for themselves just as photographers do. I believe some of these groups sometimes have activities where they are available to photographers for a nominal fee or maybe even free. You'd need to inquire.

You don't need a solution. There is nothing wrong with self portraiture. It is a difficult genre, if you can be objective you have a chance of doing it well.

you don't need models. i don't use models, a lot of people don't. selfies are really limited to instagram, and i don't know if they are a seller or not. your better off sticking with still life or something like that. and i you are going to use yourself, don't do selfie arm, use a tripod.

anything you post here must have keywords and a description, or you won't be found at all btw.

i would focus on a million ideas and don't use people. use something else, animals, do it as a plant, be creative and do a substitute.

If it's selfies, if its models, or if it's just plants

I would strongly advise:

DO YOUR OWN THING......Don't get hung up on what others may suggest

Some suggestions:
(If you haven't already done so: )

Keep your ideas in a sketchbook

Check your local art establishments for figure drawing sessions
or Facebook search for figure drawing+ your home town)
You may find models or other artists through those groups who would agree to pose for you.

Get a remote button and a tripod for your camera. There is no shame in being your own model.

Well, I personally don't care if it's a selfie if it is artistic, pretty, and/or thought provoking. I think you're gorgeous and make a perfect model. The angle you are at, the background, and the black and white all make it very interesting. Your image is nothing like the typical selfies of pretty girls doing duck lips in front of the bathroom mirror; it's much more creative. That being said, although I'm not really a fan of duck lips, I usually prefer selfies of people over professionally posed portraits in front of a fake background (such as school photos), so my opinion might not be common. But, I really like your self portrait.

You could ask your friends or relatives to model for you.

Like Brian said, there are models that need exposure that are probably willing to work with you. Often, New models are willing to be photographed by you if you give them free portrait of themselves to use as head shots for their portfolios instead of giving them money.

If there is a bridal fashion show at the fair grounds in your area, you can pay a small fee to go, watch the fashion show, eat catered food and sample wedding cakes, taste wine, listen to music, and introduce yourself to models and ask them to pose for you in exchange for a few prints of themselves. I use to do a little modeling when I was young, and this is how I met photographers. The photographers I worked with had a lot of success finding models this way. Since you are a female, it should be easier for you to approach new models and amateurs to ask them to pose for you than it would be for men to do, because most models are leery of men asking them to go to their studios for a photo shoot, because some guys could be dangerous creeps.

Some of those photographers also went to strip clubs and asked some of the strippers to model for them in exchange for a little money or (more often) prints of themselves. As far as I know, all the young women they asked agreed to doing the modeling. I bet they enjoyed taking fine art photos and portraits better than dancing at the club.

I don't see any self portraits in your gallery. The one you posted here is quite nice! Get it in there!