Savant Syndrome, What It Means To Me ~ & The Amazing Paintings My Dad Has Done 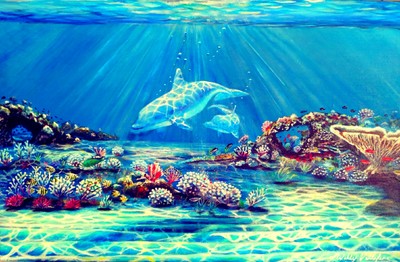 Savant Syndrome, What It Means To Me ~ & The Amazing Paintings My Dad Has Done

The first time I heard of Savant Syndrome was when I was just a teenager in High school. Back then it sounded like some kind of term describing pompous people, but I didn't know much back then.

I always did love shows like X-Files and anything related to the strange, unexplained and supernatural, and a documentary was on T.V. about "Savant Syndrome", and the strange cases of it.

Thinking it was super cool my imagination went over how it could be possible, and what it really meant scientifically, but the show said it was extremely rare so I never thought it would be something I would encounter witnessing in my life,
but fast forward another decade to my young adulthood, and at the most mundane my life had been - during a time of my life more boring than it had ever been before - my dad suddenly started painting.

He had never painted before, never tried, and didn't even know he could paint. And no one expected it either, there was no classes suddenly taken or anything like that, he just one day bought some painting supplies, and started painting.

We live in a small apartment in San Jose California, and yes - I still live with my Dad, and that's a miracle in itself since for most of my life I never liked him at all.

He wasn't abusive to me growing up. He never did anything to harm me or even verbally hurt me. In fact, he's been caring to me very patiently throughout my whole life.

No I was just a rebellious delinquent who focused so much on my own personal pains to see the value right in front of me through how much my dad really cared for and loved me.

My dad spent the entirety of my life - working, and he did it to support my brother and I. As brats, my brother and I didn't respect him at all for it, we acted like it never mattered to us - him paying the bills and buying food for us - and even now I'm at the end of my immaturity and baby steps out - still living with my dad supporting me. Sure, I've moved out before and I've even spent time living in other countries. But every time I tried to get out on my own and failed, my Dad was always there with open arms to accept me back. He's a very humble and patient man, and throughout my life ever since our Mom left, he's had to be both - father AND mother to my and my little brother.

He's sacrificed everything for his family twice over, at one point even selling his own swimming pool company in Hawaii that he built from the ground-up - just to give the money to my Mother so she could take care of herself. This was not a lawsuit or some guilt-made decision that my dad "had" to make. He did it out of love, his idea and his choice, and I didn't even know he did it until I was much older.

I had always thought I was the one with the heart, the emotion, and that I was the "Artist in the family" - writing songs and playing Ukulele and Guitar.

Turns out I was just An Artist of our family, and I am very proud of my dad.

My dad never remarried, although I hope one day he does. He's a very loyal person to the core and very much a God loving man.
And I truly think that's what it is.

He would always work hard, he never talked much but he did talk and always with wisdom, and everyone always loved him, but he didn't have too much of a social life really.
It's not that he's anti-social, I think it's just that he's content in life as he's had a lot of excitement in it already.

He was in-tune, appreciative of life, forgiving of all, understanding to others, and put God first in life,
and I think when all of that blissful nature ran to the brink within him - the inspiration of a Savant came to him, or maybe more so, became him.

Savant Syndrome in my opinion, from as I've witnessed of it through my dad, entirely comes from a different place.
Who knows, whether it's a past life talent or spirit being channeled, or maybe the knowledge is simply just "there" and tapped into.

Now paintings line every room in our apartment, before it felt like not the nicest apartment, but now it's like living in an Art Gallery, or an Art Museum.

I don't know much about Art, the terminologies for painting styles and what-not, and I wish I could show you a walk-through of it as it all looks now but my family feels it's much too invasive and that this is our privacy.

Still, I convinced my dad to host his Art Online, and although he's very weary of selling any of them, I don't feel like he should have to work anymore. I wish I could support him from here on out, but I can't. I do work my ass off trying to startup my own company, following in his footsteps, using his map and legend key at least, but, in my own direction.

And I know I will get there someday, yet still... I see his Artwork... and to me, I just know the value of his work is more than decorations on our walls.
Each work is PRICELESS, and spirit driven, inspired upon a true man of God, a servant to all he loved, and each a marking point in space and time to where he had seen an image out of nowhere, and made it come to life.

Whether it's coming to life "again", or for the first time one thing's for sure - much of his work appears like they might be actual places out there, and actual moments seen, perhaps by another. Perhaps himself in a past-life experience. Who can say? I've gotten him to put up 8 paintings so far at the time of this writing, I also edited this dolphin painting probably illegally since it's not my work, but I doubt he'll sue me, in order to liven up the color because he doesn't have a fancy camera to take the pictures with.

What do you feel of the deep within your heart by looking at these mysteriously gifted paintings?

If you feel inspired to do so, please share with us which painting you like most, and how it makes you feel ~ because to my dad I know it's not about money. It's about connection to something higher than ourselves, so thank you, for connecting and for sharing your heart, at one ~ with ours.

My dad has no idea I wrote this lol.

What a lovely post. Nice artwork also. Good luck to your Dad :-)

If you sell an image we will refuse to print if the image shows.......

We do not do quality control until you sell so, it is your responsibility to quality control your images carefully before uploading. You do this by zooming in a photo editor to 100% and then carefully going over the image, checking for the above defects

I wouldn't call it a syndrome, which is generally bad, but sometimes, when people get to a different point in life, they lose the practical, day-to-day facts of life that get in the way of things like becoming a painter and they go through changes. I think your dad is having a good time with this and it's great.