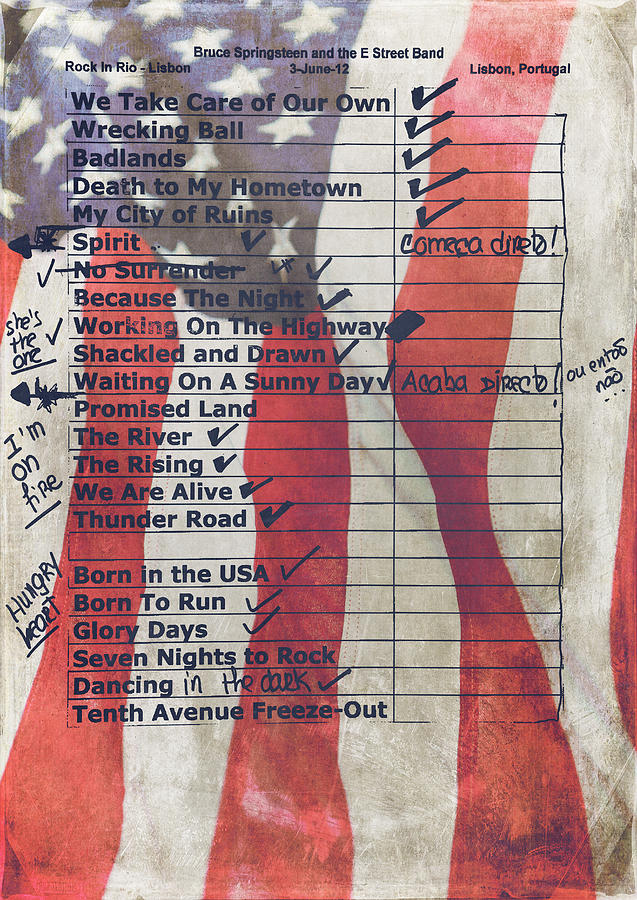 Bruce Springsteen Setlist At Rock In Rio Lisboa 2012 is a photograph by Marco Oliveira which was uploaded on August 10th, 2015.

On June 3, 2012 Bruce Springsteen & The E Street Band played at The Rock in Rio Festival, in Lisbon, Portugal, as part of their Wrecking Ball World Tour. This memorable concert ran for two hours and forty minutes.
I was there working as a producer for the official TV Channel and towards the end of the live broadcast we did of the concert, I went to the control room and asked the director if I could keep the setlist that was given to us. Aware that I was a huge Springsteen fan, she said yes! When she handed me the setlist, I noticed all the annotations that were made, mostly because Springsteen decided to play a couple of requests which caused changes to the setlist.
I obviously kept it over the years as one of my most personal and precious souvenirs. Then came the day when I started thinking I could share it with the world, not as a simple white sheet of paper containing information that everyone can easily access, but instead as a meaningful work of art. I hope you can relate to this and enjoy it as much as I do!

Follow me on Facebook to get updates on my latest work, special promotions and much more! Marco Oliveira Photography: http://on.fb.me/1tnBHal

Fantastic! Congrats on your sale, Marco!

Marco, Congratulations on your sale!...L/F

This is great Marco