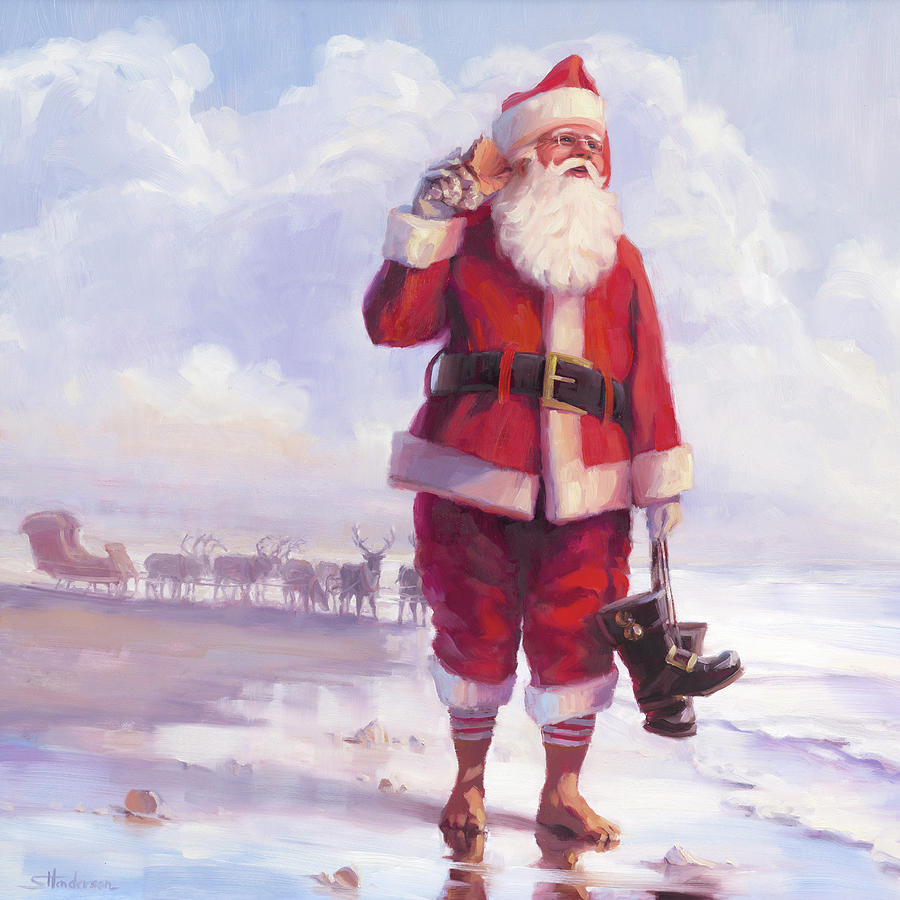 Taking a Break is a painting by Steve Henderson which was uploaded on April 26th, 2017.

Everyone relaxes in the beach.

Perhaps it’s an odd thought that “everyone” includes Santa, but upon reflection, it’s not such an odd... more

Everyone relaxes in the beach.

Who, more than anyone, is the busiest man in the world? No, not the president of any country, nor the CEO or any company, nor the best teacher or the most dedicated philanthropist (on that latter, by the say, the best philanthropists are not the rich people about whom we all hear, but rather, are those ordinary, forgotten by the media people who do good works every day, without having to be extolled for it) – but the busiest man in the world is Santa Claus, simply because, year after year after year after year, he makes his rounds around the globe to the home of every child on the planet.

He cannot miss anyone.

And yet, despite the importance of his work – a work which, because it embraces all people as equal and does not look at them as a potential means to increase his bank account beyond the limits of believability, has true value – Santa knows the importance of taking a break.

This is not just any break – a brief snatch of cookie and gulp of milk. This is a true break, a break in which Santa kicks off his boots and walks in the sand, allowing the texture of it to wriggle through his toes. This is a break in which Santa takes time to wonder at the sound of the sea – both from the surf and from the shell he holds to his ear – and the look of joy on his face is one that will come to our own faces when we, like Santa, take time to wonder at the beauty of the world around us, whether it’s the coast, the forest, or the grass outside our back door.

Taking a Break is featured on 44 Fine Art America groups.


(This image is set on the beautiful Oregon Coast, USA, but as we know, Santa can stop anywhere, anytime.)

Blessings on your sale

Congratulations on your win with this special Santa!

Congrats on your 1st place win in the WHIMSICAL SANTA contest! Beautiful and delightful work! L/F

Congratulations, Steve, on your 1st Place Win in the Whimsical Santa Contest. Well deserved for this wonderful painting! Voted.

Promoting this fabulous artwork in the Semi Abstract group "PURE FANTASY SEMI ABSTRACT IMAGES - 3 A DAY" and "Post your favorite images from this group - not your own and 3 a day only" discussion threads! f/l/tw/fb

Congratulations on your contest win, beautiful!!

THE MASTERS GROUP OF ARTISTS HAS SELECTED YOUR ARTWORK FOR BREAKING THE RULES OF COMPOSITION, COLORING OUTSIDE THE LINES, AND PROVIDING INSPIRATION FOR OTHERS. CONGRATULATIONS ON YOUR FEATURE. l/f.