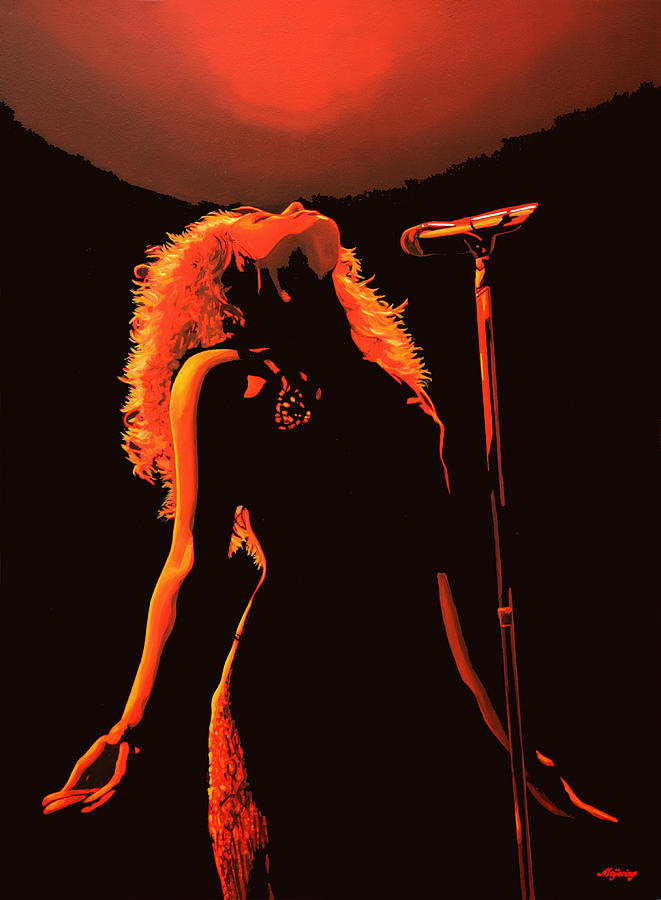 Shakira is a painting by Paul Meijering which was uploaded on May 13th, 2013.

Realistic acrylic painting of Shakira, painted by the Dutch fine artist Paul Meijering - the Original painting is 120 x 90 cm and for... more

Realistic acrylic painting of Shakira, painted by the Dutch fine artist Paul Meijering - the Original painting is 120 x 90 cm and for sale

Shakira's first studio albums, Magia and Peligro, failed to attain commercial success in the 1990s; however, she rose to prominence in Latin America with her major-label debut, Pies Descalzos (1996), and her fourth album, D�nde Est�n los Ladrones? (1998).

Shakira entered the English-language market with her fifth album, Laundry Service. Its lead single, "Whenever, Wherever", became the best-selling single of 2002. Her success was solidified with her sixth and seventh albums Fijaci�n Oral, Vol. 1 and Oral Fixation, Vol. 2 (2005), the latter of which spawned one of the best-selling songs of the 21st century, "Hips Don't Lie". Shakira's eighth and ninth albums, She Wolf (2009) and Sale el Sol (2010), received critical praise. Her official song for the 2010 FIFA World Cup, "Waka Waka (This Time for Africa)", became the biggest-selling World Cup song of all time. With over a billion views, it is one of the most-watched music videos on YouTube. Shakira served as a coach on the fourth and sixth seasons of the American version of The Voice in 2013 and 2014, respectively. Her tenth album, Shakira (2014), is preceded by its lead single, "Can't Remember to Forget You".

Shakira has won many awards, including five MTV Video Music Awards, two Grammy Awards, eight Latin Grammy Awards, seven Billboard Music Awards, 28 Billboard Latin Music Awards and has been Golden Globe-nominated. She has a star on the Hollywood Walk of Fame, and has sold between 70 and 125 million records worldwide (depending on the source), making her one of the best selling Latin artists of all time. She carries out well-known philanthropic activities through charity work most notably through her Pies Descalzos Foundation. In 2014, she was listed as the 58th most powerful woman in the world by Forbes.

Congratulations on your sale!! :)

Thank you so very much, Jim, for all your support and the feature in your joyfull group!!;-))

Thank you so very much, Robyn, for all your support, compliments and the feature in your amazing group!!;-))

Congratulations on your feature in Black Background and Color.

Thank you so very much, Lori, for all your support and the feature in your fabulous group!!;-))

Congratulations, your art work is featured on the homepage of "PICTURES FOR PRESENT" group!

Thank you so very much, Michael, for all your support and the feature in your presentive group!!;-))

Congratulation on your sale!

Thank you so much, Christopher!!;-)